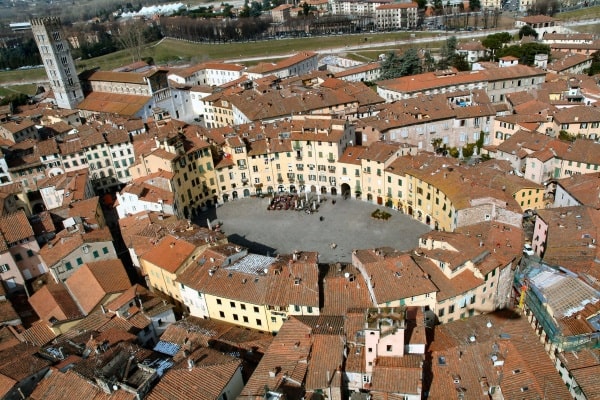 This superb tour in the company of popular and erudite art historian Clare Ford-Wille takes us to three relatively unknown Tuscan gems – Lucca, Prato and Pistoia – that are often overlooked in favour of their near neighbours, Pisa and Florence, but are exquisite Renaissance gems that richly reward detailed exploration.  The tour includes a rather more famous city, too, Pisa, with its inimitable Leaning Tower in the wonderful Piazza dei Miracoli, a stunning walled square of 9 hectares, that also houses the city’s Duomo, Baptistry and Campanile. All four cities have wonderful collections of art, mainly housed in their original locations in beautiful Renaissance churches. Clare will ensure you see and appreciate the best they have to offer with her trademark knowledge and wit, ensuring an entertaining as well as an educational experience.

Day 1: Pisa
Fly from London Heathrow to Pisa and transfer to the city centre to see the wondrous collection of buildings in the walled 9-hectare Campo dei Miracoli, truly one of the most impressive squares in the world. Its collection of superb Renaissance buildings - the magnificent Duomo, Baptistry, Campanile and, of course, the Leaning Tower, originally intended as the bell tower to the Duomo, which date back to the 11th century. The crowds strain for a picture of the Leaning Tower, but the curious will dig further and discover some of the wonderful art contained within these magnificent structures. Transfer to Lucca for check in. Welcome drink, lecture from Clare and dinner with wine at the hotel.

Day 2: Lucca
Birthplace of composer, Giacomo Puccini, the city of Lucca contains a wealth of treasures within its immaculate Renaissance walls – wide enough to cycle round- that surround its beautifully-preserved historic centre. Known as one of Italy’s “Citta d’arte” (art town), a day exploring here will reveal a host of Renaissance treasures. Our itinerary today includes a wealth of churches, including the Duomo di San Martino, San Michele in Foro, San Frediano, the Palazzo Guinigi and Villa Guinigi which houses the Museo Nazionale. Evening lecture and dinner with wine at the hotel. Please note today's visits will all be undertaken on foot.

Day 3: Prato
With its industrial suburbs, Florence’s near neighbour Prato is actually Tuscany’s second largest city, with a population of nearly 200,000. It is largely overlooked by tourists but is a hidden gem with plenty to see in its historic centre, with the added bonus of very few other visitors. We will visit the 14th century Palazzo Datini, the 13th century Duomo which contains works by Lippi and Donatello, Santa Maria della Carceri and the Castello dell’Imperatore fortress built by Emperor Frederick II in 1237.
Day 4: Pistoia and home
A little further north west from Florence is another undiscovered gem, Pistoia. Its medieval citizens were renowned for violence, whose favoured weapon was a tiny dagger called a “pistoia.” It is a more peaceful town today with lots to see including the Duomo, 13th century hospital and orphanage, Ospedale del Ceppo and the churches of Sant’Andrea and San Giovanni Fuorcivitas. Return to Pisa Airport for the return flight to London Heathrow.


NB: Exact order of excursions may vary according to local conditions and tour manager's discretion.

The four-star Celide is located on the edge of Lucca’s historic centre, just outside the city walls. Offering a high standard of comfort and service, facilities include a bar, restaurant with outside terrace, small spa and very comfortable bedrooms with all modern amenities.

Your Lecturer - Clare Ford-Wille
Clare has lectured in most areas of art history for over thirty-five years. She still teaches at the University of London, where she obtained her degree at Birkbeck, but also lectures regularly for Morley College, the City Literary Institue, the Victoria and Albert Museum and Branches of The Arts Scoiety throughout Britain, Europe, Australia and New Zealand. Every year since 1978 Clare has led art study tours to places of artistic importance throughout Europe and the USA, including Amsterdam, Padova and Vicenza.

The Nature Of Northern Greece

The Science of the Renaissance Escorted Tour