A Snapshot of Northern Greece 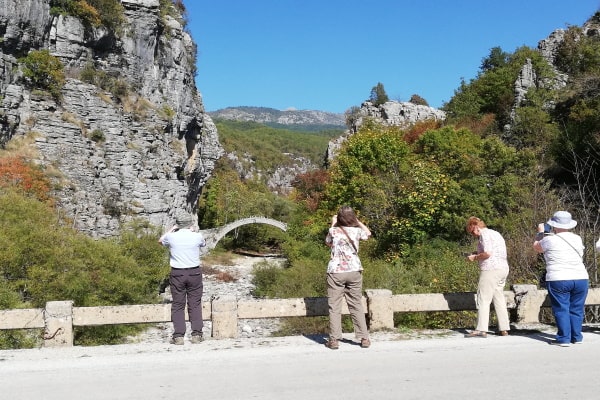 Often overlooked, northern Greece is as diverse and as spectacular as the rest of the country and simply should not to be missed! This tour showcases just a little of what is on offer in this fantastic region combining historic, scenic and cultural highlights, which, alongside convivial meals in local tavernas, ensures a broad dimension of ‘flavours’ can be discovered on this tour.

Day 1: Fly from London Gatwick to Thessaloniki. Transfer to the Royal Hotel for a three-night stay. Dinner included at the hotel this evening.

Day 2: The Blues and Greens of Halkidiki.
A day to discover some of the highlights of this  exceptionally scenic area. Known for its beaches and gorgeous blues and greens of the ocean, as well as its charming historic villages and a rich culinary heritage. Our day will be spent discovering just a little of what is offered in this region, with visits to the old villages of Arnaia and Taxiarchis, with their traditional architecture, and the coastal and picturesque villages of Ouranopolis and Afitos. The day will also include a tasty lunch by the sea.

Day 3: A Glimpse of Thessaloniki.
A day isn’t really enough to experience all that Thessaloniki has to offer, but its enough to get a feel of this vibrant city. We start with a visit at the ‘top’ of Thessaloniki, where you find the old castle walls and views that stretch all across the city and over the ocean towards Mount Olympus, which can be seen on a clear day. We will visit two of the historic highlights of the city, the Rotunda and the Arch of Galerius, just to get a taste of its historic past, and take a leisurely walk on the bustling seafront promenade, which is daily enjoyed by visitors and locals alike. There will be free time for you to enjoy a relaxed lunch and perhaps a little shopping before returning to our hotel.

Day 4: The Glories of Ancient Aigai, Vergina.
Leaving Thessaloniki behind we head to Vergina and the site of Ancient Aigai, which showcases the incredible riches that were found in the tomb that is believed to have belonged to Philip II. This spectacular museum has been cleverly created inside the Tumulus where the tombs were discovered. After our visit here, we continue to Kalambaka where we overnight.

Day 5: The impressive Meteora Monasteries.
It is not just the monasteries that are a highlight here but also the astonishing landscape, which is believed to have been formed around 60 million years ago when the seabed was moved upwards leaving huge rock pillars, atop of which monks were inspired to build their monasteries around the 11th century. When you see these incredible peaks, with the monasteries teetering upon them, you understand immediately why they became known as Meteora, which loosely translate, means ‘suspended in the air’.  After visiting the monasteries, it is on to Ioannina with a short stop enroute at the picturesque traditional style Vlach village of Metsovo. Buffet dinner included at the hotel this evening.

Day 6: Ancient Dodona and historic Ioannina.
The sanctuary of Dodona is believed to be the home of one of the oldest Oracles in the ancient Hellenic world. Dedicated to Zeus and a mother goddess known as Dione, interpretations came through the rustling leaves of an oak tree. The ruins include an imposing theatre, the sanctuary and an acropolis enclosed by fortified walls. In Ioannina we will visit the historic old centre and learn about the fascinating and colorful history of the town. Dinner included

Day 7: Timeless Zagoriahoria.
When visiting Ioannina, one should never fail to ‘dip their toe’ into the incredibly scenic region of Zagoriahoria. It is a timeless place filled with what can only be described as ‘fairy-tale’ villages! Forty six of them dot the region, each built in a traditional style of the region using local stone.  The only connection between these villages were stone built arched bridges, used for crossing fast flowing rivers, many of which still stand today, a wonderfullypicturesque remnant of the past. We will visit a couple of these villages, walk one or two bridges, take in the wonderfully peaceful scenery, and enjoy a tasty lunch in one of our favourite tavernas in the region.

Day 8: Depart Ioannina for Preveza airport for return flight to London Gatwick. If time, we will visit Lefkada old town, where you can enjoy lunch and a stroll before heading to the airport.

NB: Exact order of itinerary may vary according to local conditions and tour manager's discretion.

Please note the maximum group size on this tour is 18 passengers.

Excellent quality hotels are used for this tour, each offering a high standard of service and comfort.

Royal Hotel, Thessaloniki
Situated just 17 kilometres from Thessaloniki and only a 10-minute drive from the airport, the four-star Royal Hotel provides a relaxed place to stay for the start of our tour. Set on a hill, the hotel commands a fantastic view across the Thermaikos Gulf. The comfortable rooms all have balconies with either mountain or sea view, air conditioning/heating. The hotel facilities include a restaurant and bar.

Hotel Kastraki, Meteora
The three-star Hotel Kastraki is located at the foot of Meteora rocks in the village of Kastraki, just 2 km from Kalambaka town. The hotel has 27 comfortable and elegant rooms tastefully decorated with earthy tones and dark-coloured wooden furnishings. The public areas include a spacious lounge, TV room and cafeteria. Free wi-fi is available in all areas. A small section of taverna’s are located close by.