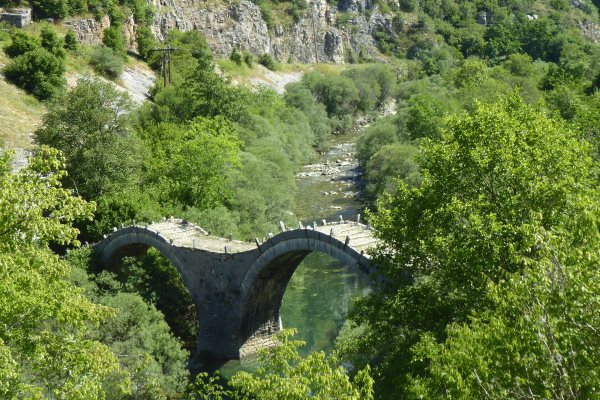 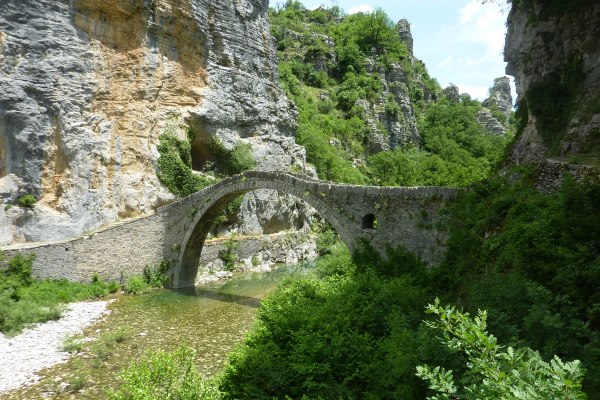 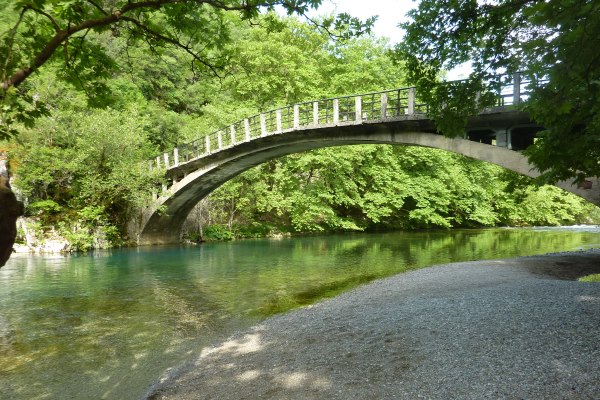 Join historian Jeremy Paterson as he takes ‘the road less travelled’ through Northern Greece, from the ancient tombs of Macedonia with their spectacular hoards of gold, to the remarkable 'monasteries in the sky', Meteora and the villages and humped–backed packhorse bridges of the Pindus mountains. We visit Ioannina, where Byron met Ottoman-Albanian tyrant Ali Pasha. We consult the oracle at Dodona, we see the site of the Battle of Actium where Augustus defeated Antony and Cleopatra. We also visit Pella, the capital of ancient Macedonia, Edhessa, the ‘city of waters’, and explore the fascinating history of Thessaloniki.

Jeremy Paterson
Jeremy taught Greek and Roman history for over forty years at Newcastle University. He has travelled widely in Greece and the Mediterranean. His enthusiasm for the ancient world was first inspired by reading Homer and then by his fascination with the archaeological discoveries at Mycenae and Knossos. He is much in demand as a speaker at home and in many of the classical countries of the Mediterranean, where he has accompanied many groups to sites and museums.

Day 2: Pella and Edhessa
Our visits begin at Pella, the capital of ancient Macedon, an extensive archaeological site with an amazing museum. We then continue to Edhessa to see its impressive waterfalls and end our day with a visit to the Macedonian tombs at Levkhadia.

Day 3: Full day Thessaloniki
We enjoy a relaxed day exploring the highlights of Thessaloniki, including some of its great Roman remains, its Byzantine churches and its excellent Archaeological Museum.

Day 4: Thessaloniki to Meteora via Ancient Aigai
This morning we travel through beautiful countryside to Ancient Aigai and visit one of the great highlights of the tour. Ancient Aigai is the site of the spectacular tombs of, what is believed to be, Philip II, father of Alexander the Great, and other members of the Macedonian royal family. Discovered in 1977, the tombs lie under a brilliant recreation of the tumulus which originally covered them, surrounded by an underground display of all the gold and silver objects found buried with the dead. After lunch we continue our journey on to Meteora, where we catch our first glimpses of the impressive ‘sky-high’ Meteora Monasteries. Check-in to the Kastraki Hotel, Meteora, for a two-night stay. Evening at leisure.

Day 5: Meteora Monasteries
Our day is spent visiting two of the six working Meteora monasteries, which cling to the tops of great and impressive isolated rocks from where we can enjoy breath-taking views. The visit to most of the monasteries involves climbing up and down quite a large number of steps but, of the two Monasteries we plan to visit, Agios Stephanos is accessible to all as it has very few steps.

Day 6: Meteora to Ioannina
We journey from Kalambaka to Ioannina through the beautiful scenery of the Pindus range stopping en-route to visit the picturesque mountain town of Metsovo. Check-in to the Grand Serai Hotel, Ioannina for a four-night stay.

Day 7: Ioannina and Dodona
We explore the lakeside city of Ioannina, capital of Epirus, which saw its zenith under the Albanian tyrant, Ali Pasha. We will cross to Ali Pasha’s island that sits in the middle of Lake Pamvotis, to visit the Philanthropinon monastery with its fine cycle of 16th century wall-paintings. Later we visit Dodona, the site of one of the great oracles of classical Greece.

Day 8: Preveza and Kassope
Today we travel down to the pleasant town of Preveza on the Ambraciot Gulf, where Mark Antony and Cleopatra assembled their forces, which were beaten at the Battle of Actium in 31 BC. Octavian, the victor, who later became Augustus, the first Roman Emperor, commemorated his victory with a great monument and a new city, Nicopolis, whose extensive remains and museum we visit. Later we visit the remains of the Hellenistic city of Kassope and see the nearby monument to the Suliot women, who danced themselves off the cliff rather than surrender to Ali Pasha.

Day 9: Zagoria and Pindus Mountains
Our tour finishes picturesquely with a visit to the stone villages of Zagoria, set amidst the fantastic scenery of the Pindus mountains, with its gorges and rivers spanned by humped-back pack-horse bridges, it is the territory of the Sarakatsani shepherds, traditionally transhumant shepherds, who grazed their flocks in the summer pastures of the high Pindos, moving them down in the winter months.

Day 10: Transfer to Corfu Airport, by coach and boat, for return flight to London Gatwick. If the flight times stay as scheduled, there will be time, on arrival in Corfu, to explore the historic and picturesqe Corfu town before heading to the airport.

This eco-friendly four-star hotel is perfectly situated right in the heart of Thessaloniki, which provides ease of access to both the city’s commercial and historical centre. The hotel embraces the eco-friendly style of operating and has been awarded the ‘green key’ for its eco-design. The comfortable rooms are classically furnished and feature wooden floors. Each is equipped with bathroom with shower or bath, hair-dryer, air conditioning/heating, tea and coffee making facilities, TV and mini-bar. Guests benefit from free wi-fi access in all hotel areas. The rooms we have selected are ‘inner view’ rooms. ‘City view rooms with balcony, (slightly larger than the Inner view rooms), are available at a small supplement.

Situated just 17 kilometres from Thessaloniki and only a 10-minute drive from the airport, the 4-star Royal Hotel provides a good choice for a relaxed place to stay for the start of our tour. Set on a hill, the hotel commands a fantastic view across the Thermaikos Gulf. The comfortable rooms all have balconies with either mountain or sea view, air conditioning/heating. The hotel facilities include a restaurant and bar.

Hotel Kastraki, Meteora
The three-star Hotel Kastraki is located at the foothills of Meteora rocks in the village of Kastraki, just 2 km from Kalambaka town. The hotel has 27 comfortable and elegant rooms tastefully decorated with earthy tones and dark-coloured wooden furnishings. Room facilities include air-conditioning, TV, Safe, air-conditioning/heating, fridge, bathroom with shower or bath, hairdryer and balcony. The public areas include a spacious lounge, TV room and cafeteria. Free wi-fi is available in all areas. A small section of taverna’s are located close by.

Grand Serai, Ioannina
A well-located and very comfortable five-star hotel that offers attractive, warmly decorated rooms. Facilities at the hotel include a spa, outdoor pool, bar and restaurant. Ioannina is within easy walking distance of the hotel.

Jane is an excellent Tour Manager and together with Jeremy and Nicos made a terrific team. We thoroughly enjoyed it. As a constructive comment I think a 'get tpgether dinner 'on the first night is very important , especially for people travelling alone. it is not easy to go out into an unknown city looking for a restaurant. The lunch on the last day was an excellent idea and it would be better to have both.

Review by Brookes who travelled 21-March-2022

A lovely trip which we thoroughly enjoyed from start to finish. Our coach driver Nikos was a very skilled driver, our guide Nikos hugely knowledgeable, Jeremy, our expert, of course utterly brilliant and Tour Manager Jane very organized, helpful and lots of fun too! Could not have been improved upon. A couple of sightseeing tours were cancelled due to them being closed down indefinitely which was a little disappointing initially but we were seamlessly taken elsewhere to see things of equal stature. The Meteora Monastries were breathtaking and the scenery in the snowy Pindus Mountains, the little villages in that area and lovely Motsovo are particularly worthy of comment. Would highly recommend.

The final accommodation in supposed 5 star hotel was poor. No Wi-Fi in room, reconstituted orange for breakfast, staff gone missing in evenings. All other accommodations were excellent. Jane, tour manager was excellent as usual and coped with all situations with efficiency and good humour. Jeremy was first class as ever. Nicos (local guide) knowledgeable, good humoured and friendly, Nicos (driver) magnificent as ever. A wonderful trip.

Review by Bishop who travelled 21-March-2022

This was a wonderful tour. Just what we wished for. Jane is an exceptional tour manager and really looked after us when we had to isolate after 5 days. She made sure we got home safely despite the failures (2 flight cancellations) of EasyJet. Jeremy and Nikos were also excellent and enriched the tour in their specialist ways. In each city the hotels were just right for the programme.

This was an excellent tour visiting really interesting places in northern Greece with a really good balance of visits to architectural sites, museums and countryside. Jeremy, Jane, Nicos (guide) and Nicos (driver) were all excellent and I don't think the holiday could have been bettered!

Review by Anonymous who travelled 23-October-2019

Our third Travel Editions trip to Greece, with the same ever- reliable team of Jeremy Paterson, tour manager Jane Freeman and coach driver Nikos. Our local guide this time, also called Nikos, was a real asset. His knowledge, contacts (and charm!) enabled us to visit some places (and/or at some times) when they would otherwise have been closed.

Review by Kilpatrick who travelled 23-October-2019

A very enjoyable and educative holiday in Northern Greece. Jane and Jeremy (and his wife Anne) did an excellent job, as did Nicos the local guide and Nicos the coach driver. We particularly enjoyed the evening ferry voyage between Corfu and the Greek mainland. The hotels were of a aood standard and we particularly liked the Hotel Kastraki. We were also very fortunate with the weather, which was warm and dry for all but the final 2 days. This was our third trip of this kind with Travel Editions and we were not disappointed.

Review by Anonymous who travelled 23-October-2019

Jeremy Paterson was excellent. Breakfasts at hotel number one (Grand Serai) were a bit hit and miss. We would have appreciated a few more options for individual exploration away from the group, with specified meet up times. An enjoyable trip overall.

Review by Jones who travelled 23-October-2019

So far I have had 3 Greek holidays with T/E and have enjoyed them all. I have 2 booked for next year. The first day was far too long and so were several others. Lunch was often late and then I felt too stuffed for dinner. Jeremy and Jane are excellent and I do enjoy travelling with them. Easy Jet are hopeless and they lost my case although it was returned today. Sometimes I feel the timetable is too full, more is not necessarily more but I do understand how difficult it can be shepherding a group of people. Don't take this as too much criticism as we saw some lovely sights and a good group of people.

Review by Davies who travelled 23-October-2019

A riveting trip, in which I found myself visiting places I had not thought of visiting and of which, in some cases, I had never even heard! I felt my areas of interest had been expanded. And in that situation, there is nobody better to have around than Jeremy Patterson.

Review by Davis who travelled 23-October-2019

Another great tour with Jeremy Paterson and the excellent local guide Nico. It was both fascinating and enjoyable.

Review by Horn who travelled 23-October-2019

Vermeer And The Dutch Golden Age

Art And Architecture in South Tyrol

The Golden Age of the Minoans